Gown with the Wind 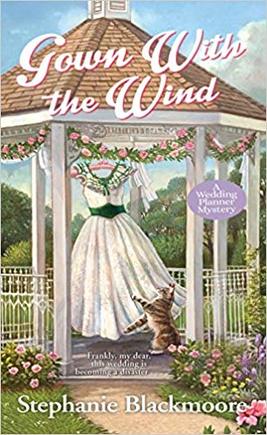 Professional wedding planner Mallory Shepard knows her job is challenging under any circumstances. But when the groom is your ex and someone invites murder, there may never be another tomorrow . . .

Mallory’s fine--really—handling the wedding arrangements for her ex, Keith. But his fiancée, Becca, has at the last minute decided to switch from a Japanese-cherry-blossom theme to a Gone with the Wind theme. She wants to honor her ailing grandmother, who owns an impressive collection of GWTW memorabilia—and who is fiercely at odds with the groom’s mother over the nuptial plans.

But among other complications, Becca gets into a fight with an old childhood rival over a replica Scarlett O’Hara wedding gown. She wins the dress—but soon becomes a murder suspect when the other woman is found dead in Becca’s swimming pool. And it’s up to Mallory to solve the mystery behind this unhappy occasion, before a different kind of civil war breaks out . . .
Amazon
Barnes & Noble 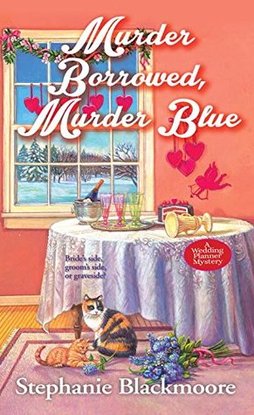 A celebrity couple getting hitched on Valentine’s Day would be a big boost for Mallory Shepard’s wedding planning business, but someone’s got cold feet: a corpse . . .

Actress Dakota Craig is set to tie the knot with her famous musician boyfriend at Mallory’s Pennsylvania B&B on the most romantic day of the year. Best of all, the whole thing will air on the reality TV show I Do. But the maid of honor has dropped out of the wedding party—by dropping dead.

A lot of people insist the show must go on, so Mallory’s investigation keeps getting sidetracked by everything from a meddling mother to a foot of snow to a side project making arrangements for a high school Winter Ball. But if she doesn’t catch the noxious culprit, the bride might wind up with a funeral wreath instead of a bouquet . . .
Amazon
Barnes & Noble 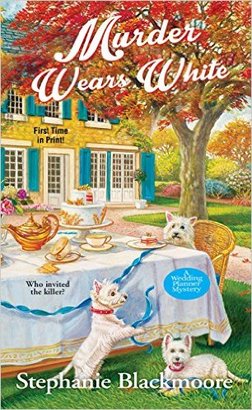 Mallory Shepard’s wedding planning business is off to a shaky start when a member of the bridal family drops dead at a food tasting . . .

Mallory hopes to unveil her new B&B just in time for her first ceremony as a wedding planner. The renovations to Thistle Park—the mansion she inherited in small-town Port Quincy, Pennsylvania—are almost complete. But what Mallory didn’t plan on is the bride’s aunt being poisoned at the wedding tasting and her perfect venue becoming a crime scene.

Adding to the mystery is the discovery that this is not the first murder in the bridal family, and as Mallory becomes engaged in her own investigation she learns the man convicted of the crime may not be guilty. Now she has two crimes to solve before the bride walks down the aisle—but a killer has other plans to ensure that Mallory forever holds her peace . . .
Amazon
Barnes & Noble

"Had me in its spell from page one. Readers will love this." --Leslie Meier
​
"I had great fun reading the adventures of nouveau sleuth Mallory Shepard as she wrangles corpses, kittens, and a cheating fiancé in this charming debut mystery." --Laura Levine, author of Death by Tiara 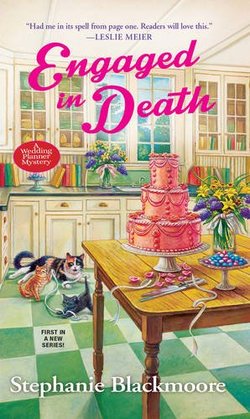 After dumping her cheating fiancé and cancelling the wedding, Mallory Shepard can't bear another disaster. So when the former bride-to-be unexpectedly inherits Thistle Park, a ramshackle mansion in her ex's hometown of Port Quincy, it's a problem she can't afford--literally. Abound with stray cats, peeling wallpaper, and nosy neighbors, Mallory is dying to sell it off--once she finally fixes up both the place and her messy life. . .

Turns out, Thistle Park has its charms. But the honeymoon phase is abruptly cut short when an unwanted visitor is found dead on the front lawn. Enlisting the help of her sister Rachel, Mallory vows to unveil the killer before she herself becomes married to the suspect list. . .
Amazon
Barnes & Noble
Stephanie Blackmoore
Stephanie Blackmoore Cozy Mysteries